Once upon a time a fish out of water was caught red-handed between a rock and a hard place. Since love is blind and what doesn’t kill you makes you stronger, a bull in a china shop at the end of the day is a bad egg whose actions speak louder than words. But if you read through the lines and play your cards right, the low-hanging fruit is an uphill battle in this day and age because the grass is greener on the other side and ignorance is bliss.

What a story! Such exhilaration! Alright so I've been thinking a lot about clichés lately. Thinking isn't quite the right word. Troubled by clichés? Haunted, perhaps?

These things have managed to worm their way into the front of my brain like an icky little parasite and have taken to leaping off the page and out of people's mouths like visual sound effects in a comic book. 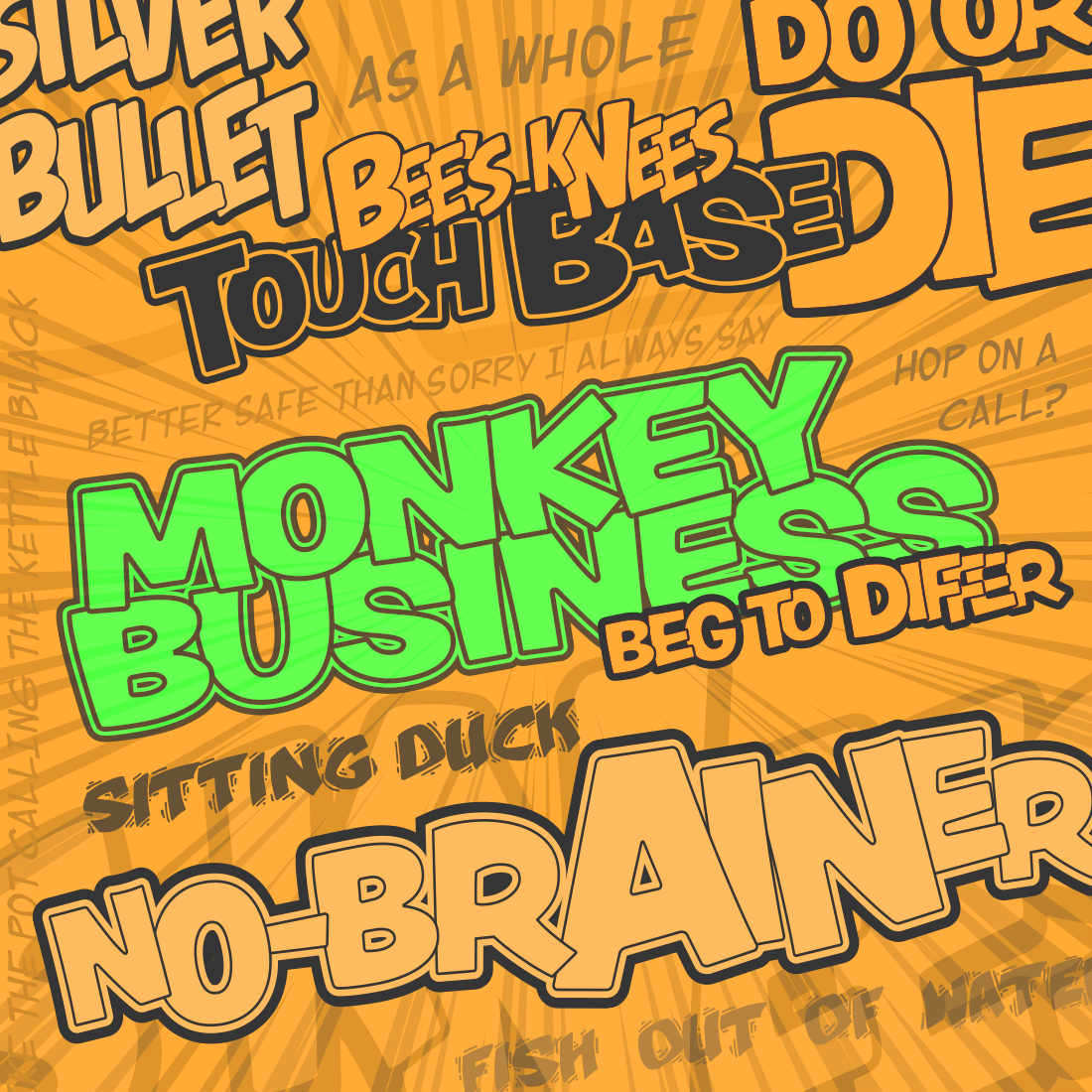 Clichés are expressions, ideas, or elements of artistic work that has become overused to the point of losing its original meaning or effect, to the point of being irritating. And yes, that's the dictionary definition. How cliché. I tried rewriting it eleventy times and that one is still better.

But they're everywhere! Daily conversation, blog posts, amateur novels, indie song lyrics, mediocre network dramas, web and print design, meandering podcasts, billboards, and YouTube channels are all so full of clichés that they resemble a cheese-filled Italian sausage on a grill — sweating, oozing, and ready to burst and spray bystanders with scalding meat juice.

Why clichés bum me (and others) out

Clichés drain the power out of the expressions and ideas they live in, like holes in your car's exhaust system stealing your horsepower or malicious cryptojacking malware harvesting your CPU for shards of Bitcoin.

Let's see what's in store and open the metaphor door to underscore the need to implore an out-and-out war on this hardcore eyegore.

Imagine your content is a highway and each cliche is an exit ramp — an invitation to leave. Each cliché your audience encounters is an increasingly tempting attraction, a growing and compelling reason to bail in favor of the scenic byway.

We're cruising along and suddenly we come to our first exit — a giant ball of twine. A rogue cat-lover cuts across three lanes while we serve and avoid a near miss. Close call. But look! A new Starbucks with clean bathrooms. An all-expenses paid Caribbean cruise. Season 2 of Firefly.

Your audience will eventually reach a breaking point — one cliché too many — content or design too generic to tolerate any longer. At some point they will get off your highway. They'll close your website, put your book back on the shelf, and unsubscribe from your podcast.

Pros at the top of their field work very hard to avoid clichés. Writers, directors, actors, producers, song-writers, and designers are all on the lookout for these caltrops and work diligently to avoid letting them slip through the editing process and into their finished work.

Why are clichés everywhere?

Why do we lean on these phrases and patterns like a crutch? I have some theories. Let's cover three of them. Three feels like the right number for medium-length email.

I'm willing to bet that there are many people who don't realize certain phrases are clichés at all. Or that clichés are even a thing, just like kids today don't know what a floppy disk is, or why it was the universal save icon for decades.

Somewhere out there, a fresh college grad in his first "real job" is trying on the phrase "a picture's worth a thousand words" like a pair of skinny jeans, hoping to justify his suspiciously light-on-substance Powerpoint presentation.

And then there's the young writer finishing her first novel called When in Rome, and she doesn't realize how many times the average adult has encountered that phrase. Or even that there's a second part to that cliché (do as the Romans do).

Tucked away in the back of a coffee shop there's a budding designer (or two) finishing his first website and it looks like this. The rest of us have seen this design literally – and I mean literally in its original, God-given definition – hundreds of times.

This is the learning process at work. We emulate what we see and hear, especially from those we respect or are trying to impress. Kids do this all the time. Most grow out of it. The rest fall into group #3.

Then there are those who process their thoughts verbally. They are often smart, deep thinkers with a lot of wisdom and experience to draw on. During conversation, clichés spill out and fill empty spaces like spray foam insulation, each stealing a spare second or two while deep thoughts finish developing.

You may hear "as a whole", "that being said", "the big picture", "taking a step back" and "at the end of the day" quite a bit. I find myself doing this quite often, though I'm not quite sure how deep my wells of wisdom run.

Or lack of time. Or care. This is the category we can do something about, today. Clichés are easy shortcuts to familiar concepts. We drop 'em into our blog posts, emails, prose, marketing content, and designs so we can just move on already.

Have you ever struggled to write the opening paragraph in a blog post? How many clichés did you try on for size? How many did you leave in there?

Every existing cliché is an opportunity

If every cliché in your content or design is hurting you — driving up bounce rates and reducing conversion and engagement — then by the same logic replacing them is a opportunity for the inverse.

Treat every cliché in your content as a placeholder, a chance to be remembered instead of forgotten. Breathe personality into your content and designs! Replace the white noise of clichés with a splash of metaphorically vibrant color. Or colour if you prefer.

The minefield of exit ramps is a roadmap of easy victories. So be unique! Be bold. Be remembered.

Here are some strategies, suggestions, and tools that might help you on your quest.

Especially when it comes to design, conventions like nav bars on top, hamburger menus, off-canvas mobile navs, and logos in the top left, are all perfectly fine. Encouraged. Do your research, keep up with best practices, and don't blow up 16px icons to 80px. They'll look silly.

Often a cliché can simply be removed and the sentence will still work. Take the example below. If you remove the clichés and add a two letter verb (do), what remains is a stronger and more direct sentence.

On the design side of the equation, I have a video on YouTube called From Meh to Pretty Good in an Hour that takes a generic Bootstrap-style site and redesigns all the visual clichés. Give it a watch if you're looking for ideas.

No idea how to rewrite a sentence? Try word substitution. Replacing "the grass is always greener" with "the poop is always browner" will have mixed results, but I promise that the latter is more memorable.

Trends can be fun, especially if you can hop in early before they're all dried up. Staying on the rising-side of a trend can bring you work and recognition. Hanging onto a trend long after it's dead is a different matter.

I've found a lot of joy in creating retro 80's sites like Laracon 2019. I was even asked by TJ Miller to design something similar for his personal site (I didn't — his persona doesn't quite track with mine). But we're seeing maximum saturation in the 80's vaporwave aesthetic. Is it time to move on? We'll see.

Try blending the latest trends with something unexpected. Remix and create unique mashups. You can stretch the shelf-life of designs this way and be more memorable at the same time.

Oh, and don’t rip off Stripe, you can’t beat them at their game, they probably have more budget than you. Don't settle for being a shadow copy.

Tools that can help

Use sites like Grammarly, Readable, or Cliché Finder to sniff out the clichés in your writing. After a little time spent editing you'll start to spot them without assistance. You'll end up just like me, twitching silently whenever you encounter aces up sleeves, shoestring budgets, and a whole nine yards of anything.

Here's a giant list of clichés, just in case you wanted to skim the list until your eyes hurt. It's the biggest list I could find. If you find anything more comprehensive I want to know about it.

The words at the bottom

You will find it quite difficult to eliminate every cliché from your work and vocabulary. There's little harm in using one every now and then. Be aware of the effect clichés has on your work and look for ways to standout instead of fitting in.

And don’t be afraid to use clichés when working on drafts. They're an acceptable shortcut when you're trying to get to the "big idea". Just make sure to come back and rework them later.

That's all I have to say on the subject. If you want help or would like more examples, just ask!

Fun fact: this article uses the word cliché 35 times. I hope I never have to type it again. That special é is annoying.

P.S. What cliché do you find yourself using the most? That's 36. Mine is "In all honesty", which is quite redundant because I try to always be honest. I'm working hard on weeding it out but the infernal thing keeps growing back.

P.P.S. The Dutch word for cliché is "gemeenplaats". Don't you just love that? 37.

The Gentle Sadness of Things Finally, a coffee replacement to be excited about! My 900
RSS baby!