And by "there" I mean I was at home, watching it live on ESPN. It was the X Games in July 1999 and the entire event was running overtime.

My eyes were glued on Tony Hawk as he stood atop a large half-pipe, ready to drop in. His teeth were gritted and sweat poured down his face. He was striving to land a 900. No one had landed one. It was thought to be impossible. If Tony could land this, on national television no less, he would forever be remembered in sports history canon. The clock was stopped. Forgotten. The trick contest he was participating in ignored. All eyes were on Tony as he tried again and again. He was so close and everyone could taste it. The could feel him inching closer and closer to sticking the landing. The crowd chanted his name.

Wipe out. Another wipe out. The fourth, the fifth the major sixth. Each time, closer. Each time, charging back up the stairs to the top of the half-pipe for another attempt. The intensity in his face hardening so tight you knew that to him — he was the only person on that pipe. He was his own biggest competitor. ESPN couldn't cut away. They couldn't stop the broadcast. Nothing following this moment felt important. The heck with the schedule.

And then it happened. He stuck the landing, and Tony Hawk became a living legend. As he coasted up the far side of the vert, the look on his face reflected the entire journey — one most couldn't imagine. A 12 year pursuit of the holy grail. Countless injuries, endless frustration, relentless pursuit, culminating with mountain top peak moment as he landed the unlandable in front of the world. 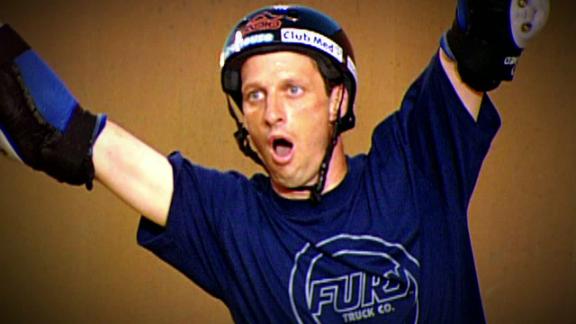 Tony Hawk's story was that of the underdog. He pursued excellence in skateboarding with ever fiber of his being. He had ridden the rise, the fall, and rise again of skateboarding's populatity in the current culture. He found fame and fortune, lost it all, and got it back again. It was the kind of story that made him one of my heroes growing up.

I wanted to be like Tony Hawk. I couldn't skateboard, but that didn't matter. I knew if I worked hard enough that eventually I would have my own 900. I didn't know what it would be, but I knew I would get there. I just had to. If Tony could do it, so could I.

23 years later I'm wondering what that metaphorical 900 might have been because it feels like all my biggest wins are behind me. I can't help but feel like I'm already past peak in terms of celebratory accomplishments in my industry. Was launching Statamic in 2012 my 900? Maybe it was Statamic 2 in 2016 or Statamic 3 in 2020.

Or maybe it was speaking on stage at Laracon. The first time. That second time was kind of a flop in my book. I didn't prepare enough because I thought I was good at public speaking. Prior success never guarantees repeat success. You have to earn it every time. That was a hard lesson. I haven't spoken at a conference since then.

Maybe it was being asked by Hollywood celebrities to design their websites (sorry for the lack of details — NDAs gonna NDA). Or maybe it was design work I did for Taylor in the Laravel ecosystem, or the podcast I co-hosted with Adam Wathan for a little while.

I find myself in these thought patterns more and more lately. My body and mind don't do what I want them to anymore. I'm 39, not "old" but not really young anymore either. I've had a rough go of things over the last 2 years on the health front. I'm determined to not become a victim, but to take joy in what I do have and see the obstacles in my way as opportunities. Easier said than done, but I'm working my way through it.

I've been watching a lot of documentaries lately — following up on all my childhood idols to see what became of them after they fell out of the spotlight. Michael Jordan in The Last Dance. Phil Tippett in Mad Dreams and Monsters. And most recently, Tony Hawk in Until the Wheels Fall Off. These men were at the top of their respective crafts. They had no equals in their sport or profession. They had no peers. They were kings among men, accomplishing what us mere mortals could only dream of.

But they all have similar, sad stories. Brokenness. Emptiness. A bottomless pit they couldn't fill, a broken drive for more that pushed them beyond the bounds of reasonability. It's what got them to their peaks, and it's what tortures them today. I watched Tony Hawk destroying his body to land a 900 again at age 56 to prove to himself that he still could. It was hard to watch.

Our bodies are aging. Our minds not as sharp as they once were. I always used to roll my eyes when some adult told me that life was short, but I get it now.

When I'm at my most level-headed, most contemplative, most "in the now", I can honestly say I have found a type of success I never expected, nor sought, and I am deeply thankful for it. These men, these heroes, role models, and dare I say idols — were searching and striving for something they couldn't attain. Something I have.

I am content. I have freedom to control my schedule. I don't worry about money, don't stress about work, an am surrounded by people who love me. I get to spend a lot of time investing in my kids. No, I haven't set records in my industry, earned mass fame and fortune, haven't been invited to George Harrison's house, and don't own a multi-million dollar empire.

But I have enough. And enough to share with those with needs. And enough time to spare for my kids who need me. And that is enough. That is my 900. That is the success God was gracious enough bless me with, not the one I sought for myself as a naive kid.

I write this not for you, but for future me. When something stirs deep within me — something that says "That could be your 900." I need to be reminded of what I have, and to not take it for granted. It doesn't mean I won't try new things or swing big, but I won't put what I do have on the line for it. If I shoot for Everest but only get the snow line, that's enough for me.

I did it anyway Take Longer Videos Finally, a coffee replacement to be excited about!
RSS baby!