A few years ago we (my wife and I) brought our 3 kids to the Boston Museum of Science for a day full of learning and hands-on science.

Sometimes you need to stop reading about and watching science and go do science with your own hands. And so we did science, science got done, and there was very much science involved.

Towards the end of the day, feet weary from walking and minds numbed from all the science, we found ourselves in the basement of the museum in a small and underwhelming section about birds. It had all the indications of an exhibit designed in the late 90s and neglected ever since. Any interactive-elements were rudimentary, 4:3 screens built into the walls hid their protruding and angular fannies, and the paintings of wildlife scenery behind taxidermied ducks on sticks were faded and almost cartoonish like a scene from Mary Poppins.

I plopped onto a bench in the corner to rest my tired footsies — no hard feelings towards my pair of Chuck Taylors mind you — and was faced with a small touch screen in a cabinet presenting several play buttons.

This is how I found myself watching a series of video clips on "bird language".

These videos featured bird language expert Jon Young. Bird language, it turns out, is language used by birds. I discovered, thanks to years of work by Jon Young (and probably others) that humans can — with some measure of reliability and consistency — learn, discern, and understand what many birds are saying.

Jon described the process of learning the different calls a bird may use in different situations. That process was patience, meticulous observation, and consistency over the course of weeks or months. Sometimes years. Per species. Per location. These calls can be so varied that the same species on one side of a river may use different calls from those on the other.

His research resulted in the ability to tell the difference between a warning call for a predatory cat on a casual stroll and one on the prowl. He can tell the difference between the call for an animal predator and a human, a human taking a stroll and a hunter on the move, and I'm willing to bet — a human ignoring nature while staring at an iPhone vs one fixed on its Android. 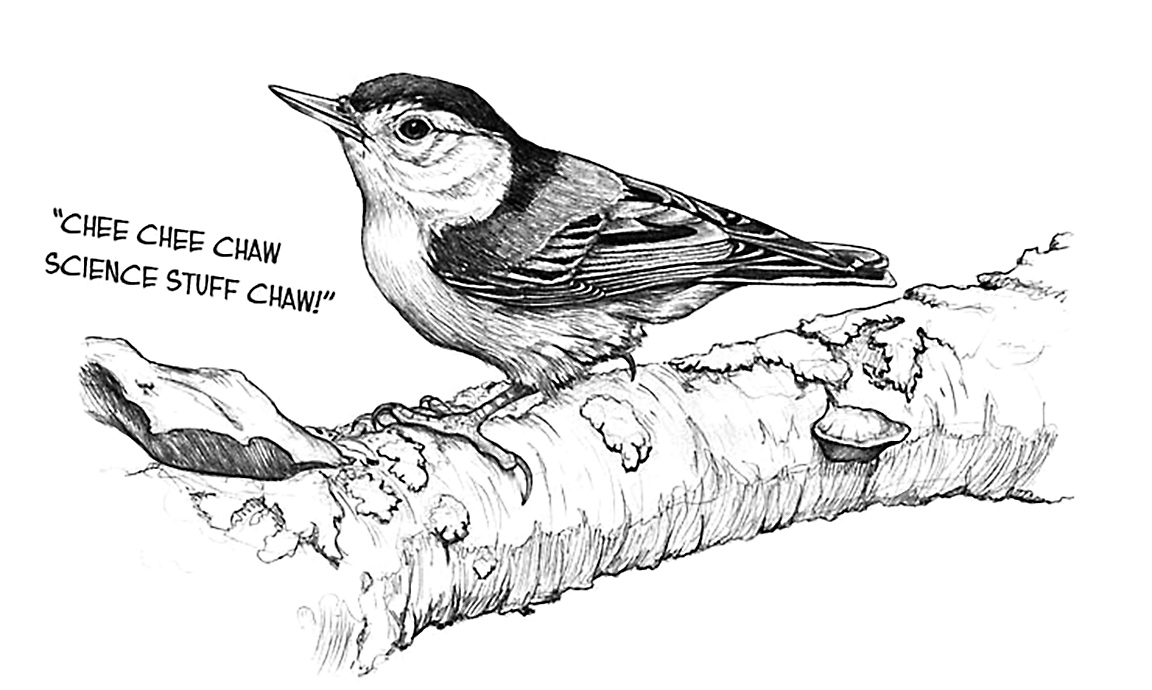 I was in a trance watching these videos. My wife waved her hand in front of my face, "You okay?" She looked puzzled. Probably because this is the least exciting installation in the least interesting exhibit of the museum, and I can't tear my eyes away from it.

You see, I was lost in Imagination Land™ pretending to be Jon Young. In my day dream I was living the life of a man who probably wore the same hunter green button up shirt and khaki pants every day, who probably spent most of his time peacefully in the woods listening to and recording the sounds of birds. A man who not probably — but definitely wrote several books and produced several DVDs (and an unknown number of VHS tapes) teaching the art of learning bird language.

It was clear to me that Jon enjoyed what he did. There was passion in his voice. He couldn't hide it. He was obviously not an actor, and at the same time obviously not reading cue cards. He lived and breathed bird language and could talk on it all day. This was a life of purpose to him, as bizarre as it might sound to some of us.

I started comparing what imagined his day looked like compared to mine and those of us in the web/tech industry.

I doubt he woke up thinking to himself, "How can I increase my SCPH (Songs Comprehended Per Hour) by 5% today with one little hack?". He probably didn't spend the morning on Medium scouring articles on improving his bullet journaling process so he could record his "chee chees" and "chah chahs" with increased efficiency before hitting his 3-articles-per-day limit. Nor do I imagine he binged a stream of YouTube videos on the top methods for reducing the churn rate of birds-leaving-branches-before-singing while he shoveled a bagel and double espresso down his gullet.

Instead, I like to imagine he woke with the sun, pulled on his hunter green shirt and khaki pants, and trekked out into the crisp morning wilderness. He walked quietly as to not chase away the wildlife, sipping a thermos of black coffee as he recognized a few birds by sight or by sound and they, in turn, recognized him. He probably chuckled to himself as they announced his presence with a signature "chee chee chah cah chah ch ch ch ch chaaa!". Maybe he attempted a chipper "cheep cheep chah cha chah!" of his own in response.

As the sun started its decent into the late afternoon sky, the carpet of autumn leaves began to glow like embers in a fire. He strolled back to his truck, hands in pockets, and drove home for dinner. He smiled and patted his notebook and tape recorder, each more full than yesterday.

"That Pine Siskin came back today," he may have mentioned casually to his wife between bites of chicken casserole, "but those damn squirrels chased it off again." I imagine that Jon hates squirrels but has a soft spot for chipmunks.

I wonder if he worries about what he's doing next week, next month, or next year? Does he worry how he can maximize the impact of tomorrow's day? Does he worry about whether his job will become obsolete or replaced by robots or AI, or if his tech stack (notebook and tape recorder?) will be suddenly outdated and force him to relearn his craft?

Or does he just do what he loves and let the rest worry about itself?

I may only speak for myself (I doubt it), but I've grown tired of the constant tension and anxiety that I carry with me every day in this industry. The low-lying fear that something new and shiny will come along and yank away all of my users and customers with the promise of shiny features, workflows, or a UI that's better than mine, but may very likely be out of business in 6 months.

At the edges of my mind there is always the ever-present fear of missing out on the next best thing, the newest way to save 5 minutes a day, or some new revelation that requires restructuring the entire way you work.

And there's the rub, isn't it? We work hard, build our products, and proffer our wares, but then allow fear to drive our decisions. 2 weeks without growth or a change in the status quo combined with a daily dose of social-media driven FOMO and we abandon our fledgling efforts for the next idea before it's had chance to take root.

Things take time. Learning the mating call of the Bohemian Waxwing or European Starling takes time. Hiking out to the far side of the valley to find the variated calls of neighboring White-breasted Nuthatches takes time. Learning the difference between "chee chee chaw chee chee!" and "chee chee chaw chaw chaw!" takes time. Growing a product, a YouTube channel, a blog, a newsletter, or a Twitter following takes time. Building Statamic into a profitable business took many years. There are very few shortcuts in life, and those that exist have trade-offs that are rarely worth the cost.

That's not to say that every idea takes years, nor does patience always pay off. But consider your approach. Are you hyper-focused on the short-term day to day or do you regularly sit back and look at the long term lay of the land?

Pondering the various ways others live, work, and find purpose has become a bit of a hobby for me. I don't find many answers on the surface, but it's the questions we can't answer that teach us the most. They teach us how to think. If you're given answers, all you gain are little facts. They're easy to forget. Easy to dismiss. But if you're given a question and you go searching for your own answer, what you find will be precious to you. In that spirit, here are some questions I'm asking myself. How about asking them of yourself, too?

It's the questions we can't answer that teach us the most.

What would it look like if you decided to give your product/project/channel/blog/newsletter a full year of attention and planning before you made any judgments about its success? What about 3 years? 5?

How would things be different if you spent less time worrying what everyone else is doing and sought joy in your own work?

What if you woke up, made some progress, ignored the draw of FOMO-inducing social media, and clocked out a little early? And did it the next day too?

Should you start something if you don't have the patience or time to maintain it and let it grow naturally?

What if you regularly allowed life to borrow a weekday instead of letting your job steal a weekend?

Who would you become if you replaced your to-do list with a to-be list? How would that change what you do when you sit at your computer?

What could you do less of (or none of) and still be as effective as you are today?

Do you need to try the next latest and greatest thing or can you keep doing things the way you do them now for a while longer?

These are just questions. I urge you to seek your own answers. Use science if you have can. Science is good. Feel free to tell me what answers you find, knowing it may only be true for you. I have to find my own answers too.

_P.S. I take comfort in the fact that there are people like Jon who are doing jobs that don't rely on technology, user acquisition, engagement rates, and the pursuit of infinite and perpetual growth. I respect those that seek the unknown. There's a real sense of wonder to it that warms and inspires me.
_

About those Florida Gators... Here's What I Change on Every New TailwindCSS Project Why I Play Video Games
RSS baby!